In the fifth weekend of our Teacher Training Intensive the students were given a quiz on the Sanskrit terms necessary to understand in identifying the asanas (postures). Sanskrit is a beautiful language, like Latin, in that it is the origin of other languages. In India, Sanskrit is known as “the language of the Gods”.

There are several major schools of Yoga coming from India. Most of the schools have similar postures but call them by different names. This makes for some confusion when discussing asanas. As well, in different regions in India they tend to shorten part of the pronunciation, asana becomes asan. This shifts the accent of the word; “Ut ta NA sa na” becomes “Ut TAN a san”.

Since our Training emphasizes the work of Krishnamacharya, the names of the postures tend to be the same however the pronunciations can be different. As students and practitioners of yoga it is important to stay flexible in the mind. ears, and tongue, as well as cultivating flexibility in the body! 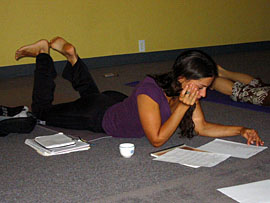